When I was a child, I remember my mom telling me that it was bad luck to put your shoes on a table. I don’t necessarily subscribe to superstitions, but this one always stuck with me. I mean, it makes sense: the dirtiest items that we wear shouldn’t go on the place from which we eat. While I do a lot of things inconsistently (call friends, floss, sleep, etc.), I never, ever put shoes — either by themselves or in bags or boxes — on the table.  I just don’t. Until…

I was feeling a little cavalier last week, I put my giant Timbuk2 on a table in my office. I knew that it had a back-up pair of flats in there, but I thought, “eh, it’s just an old wives’ tale — nothing will happen!”

And nothing happened. That day.

Then I get a text from my aunt saying that my grandmother fell and was in the ER.

And then I dropped my iPhone and cracked the screen — when I’ve never damaged a phone in 15 years of having one.

And then I got not one, but two of those automated tickets from a traffic camera.

And then I lost money at work.

Phew. It’s been a long week. 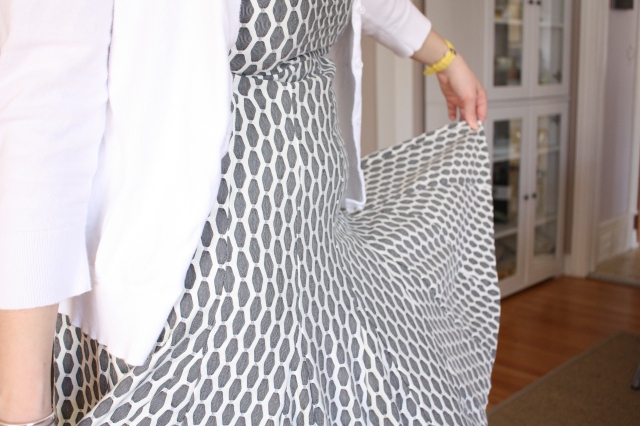 These photos are actually from before my bout of bad luck — when I found this dress that Stitch Fix was sending out last year on sale on the TJ Maxx website and when I wore said dress to work and didn’t get a spot of stage blood on it. Amazing feat, right?!

As you know, I love a good deal — which it why I peruse the TJ Maxx website often. And lately, I’ve located a few dresses that were featured in Stitch Fix ads/reviews at great prices. Want some examples?

Obviously, there’s the dress pictured above, which I originally read about on the Crazy Together blog. TJ Maxx has it in both grey and blue right now; originally it was $98, while I found it for $40. (Also: if you’re looking for a similiar, but not exact match, to Maria’s red lacy dress, here’s one at $35 from London Times.)

I also discovered this Donna Morgan beauty too: Stitch Fix featured it on Instagram sometime in February I guess. SF sold it for $118, it’s for sale at $40.

Here’s another Donna Morgan featured on IG for $50.

Or a Taylor dress for $60 on Nordstrom Rack that was featured on IG.

Good luck to any ladies looking for some Stitch Fix dresses on the cheap. And, if you order shoes to go with your new frocks, don’t put the box on a table, lest you want a slew of bad karma.

50 Years of Public Support for the Arts in Rhode Island

Notes on collections at the RIHS

Where have your shoes been?

A Pear to Remember

How to dress a pear shaped body

Tales of a happy lady

inside my colourful mind

The Art and Craft of Blogging